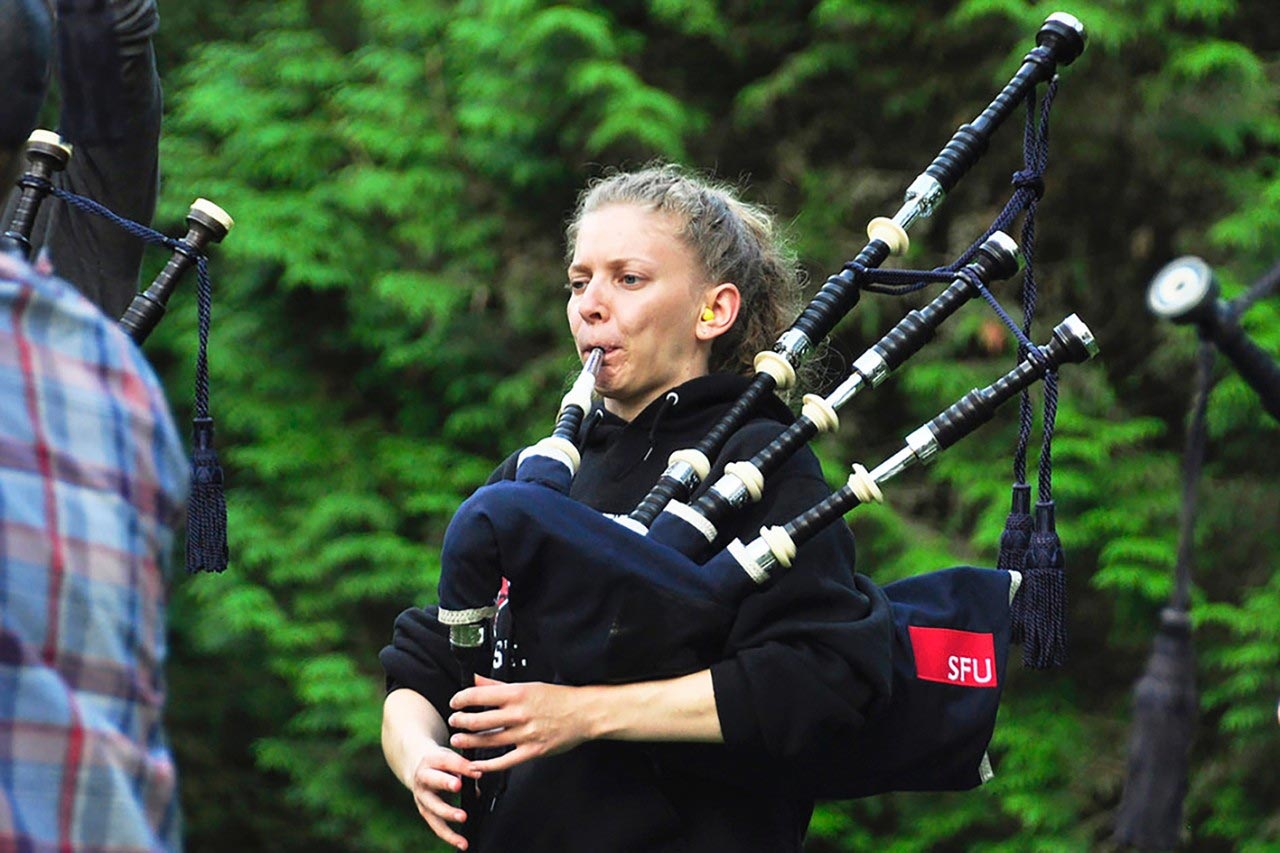 SFU piper and student Tori Killoran began as a young piper with the Robert Malcolm Memorial band. The annual Robbie Burns event, to be held on Jan. 21, helps support the band's youth programs, which develop new talent and an appreciation of Scottish culture.

The pipes of the six-time world champion Simon Fraser University Pipe Band are calling enthusiasts of Scottish tradition and culture to attend the band’s annual Robbie Burns dinner and silent auction on January 21.

Held at Coquitlam’s Executive Plaza Hotel, the event is also a fundraiser for the band’s youth education programs. In August, members of the junior Robert Malcolm Memorial (RMM) Grade 3 band will travel with the elite Grade 1 band to compete at the World Pipe Band Championship in Glasgow.

“We hold this special event not only to celebrate Burns but to showcase all levels of the SFU pipe band organization, and as a fundraiser for our junior bands — the source of our future talent,” says Pipe Sergeant Jack Lee. The youth band system was created in 1994 and has since attracted hundreds of young piping and drumming enthusiasts.
Tori Killoran and her sister Taylor were young teens in 2011 when the family began travelling twice a month from Kamloops to Burnaby so they could practice with the RMM band. A year later, Tori, a piper and Taylor, a drummer, competed with the band in the novice-juvenile category at the “Worlds” in Scotland. The band landed an impressive third prize.

Killoran, now a third-year SFU criminology student, was named to the six-time world champion SFU Pipe Band in 2015. She says the opportunity to be part of a world-class junior piping and drumming education program is helping to shape her future.

“Growing up in Kamloops, it was a dream of mine to play with the SFU Pipe Band," she says. "I was amazed by how an entire pipe section could be so ‘in sync’ and have an enormous sound. Every time I heard the band I was blown away.”

Taylor has also recently been elevated to Grade 1 and the two will play together for the first time in the elite category at the 2017 Worlds.

Piper/drummer brothers Brian and Graham Haddon have shared that experience. They were members of RMM’s Grade 3 band—which won a world championship in 2012—who later rose up the ranks to become elite members. Both are also SFU students.

All are examples of how the band’s commitment to nurturing young musicians is paying off as a “pipe”line of new talent into the elite band, while helping youths develop musical skills and foster their love of the culture.

Last year SFU’s Grade 1 band placed fifth amid a resurgence of talented Scottish bands. Always a strong contender, SFU has landed in the top three at the Worlds more than 20 times since it began participating in the annual competition 30 years ago. The band has recorded albums at some of the world’s most prestigious concert halls and continues to push the boundaries of the piping music world.

The Burns event features dinner, live entertainment by the SFU and RMM bands and local dancers, and a silent auction showcasing the band community’s local business, crafts, products and services.