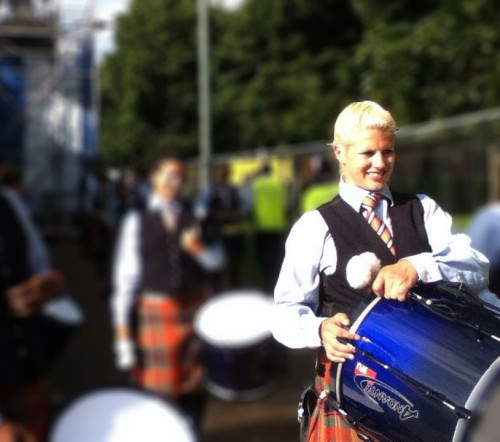 The Simon Fraser University Pipe Band family sends heartfelt condolences to all the loved ones of tenor drummer Brittany Lee Angeltvedt who passed away on August 26th. Brittany was a star both within and outside of the pipe band world, and will be greatly missed.

The SFU Pipe Band was fortunate to have Brittany in the band for many years where she won the World Championships with the band in both 2008 and 2009. Brittany was also formerly a member of the Robert Malcolm Memorial Pipe Band that captured the Juvenile World Championships in 2003 and 2005. After retiring from the juvenile band, Brittany gave back to the organization as an instructor for many years. Amongst Brittany's other tenor drumming accomplishments include winning the BC Pipers' Association Open Tenor Drumming Grand Aggregate 4 times, and also placing 2nd in the 2005 Gold Medal Tenor Drumming Championships at Winter Storm. Brittany also performed at numerous concert venues with the SFU Pipe Band including the Lincoln Center and Glasgow Royal Concert Hall.

Further details will be forthcoming.