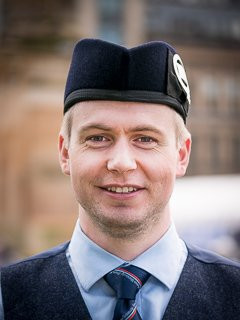 Richard began his piping in South Africa in January 2000 at the age of 8. He received his instruction from Chris Macaulay and later from P/M Jimmy Elston of the Krugersdorp Pipe Band; a band which Richard joined shortly after. After emigrating to the USA in 2003, he joined the Sir James McDonald Pipe Band in Portland, Oregon.

He began competing as a grade 5 solo competitor in 2004 and has won the BCPA Grand Aggregate for Grade 5, 4, 3, 2, 1, and 1 again in consecutive years. Richard is now in his 7th year with the Simon Fraser University Pipe Band.