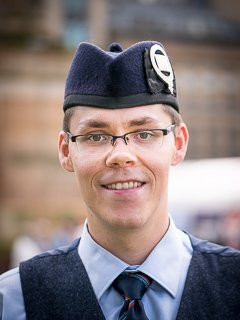 Originally from Edmonton, Zephan began piping in 1999 as an Air Cadet with the 570 RCACS Pipe Band. The following year Zephan joined the Edmonton Boys Pipe Band and the Vimy Ridge Academy Pipe Band. In 2003 Zephan joined the grade one Alberta Caledonia Pipe Band, of which he was an active member until 2013. Zephan also enjoyed stints in grade 2 with the St. Thomas Alumni Pipe Band in 2011 and the Viscount Park Pipe Band in 2014. Zephan joined SFU for the 2014-2015 season. Zephan is also a regular competitor in open solo competitions. His most noteworthy prize to date was winning the overall aggregate prize at the 2016 BCPA Annual Gathering.