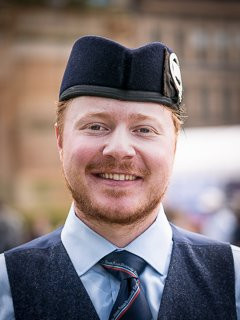 Jamie started piping in Winnipeg, and played with Transcona & District, Lord Selkirk Boys and St. Andrew’s Society Grade 2 Pipe Bands. He attended four years at Piping Hot Summer Drummer, and moved to Vancouver in 2012 to join SFUPB. Jamie is an open player with prizes both in BC and overseas. Jamie has studied both at SFU and the Vancouver Film School and has a diploma in Sound Design for Visual Media. Some of his latest work include NHL18 and Need for Speed Payback.