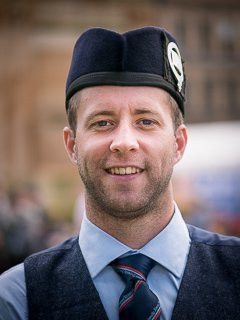 Alastair started with the Robert Malcolm Memorial Pipe Band. Joining SFU in 2008, he was privileged to win the Grade 1 World Pipe Band Championship in his first two tries (2008 & 2009). In concert, Alastair can be seen playing both pipes and keyboards.

As well, solo pipe competition has been a focus for Alastair. In Scotland he is now in the Former Winners MSR at Oban as well as the Gold Medal for Piobaireachd at Oban and Inverness. Alastair also plays for highland dancing on a regular basis.

In his private life Alastair graduated with honours in 2013 from the Art Institute of Vancouver in professional sound engineering. He currently works full-time at the well-known Scottish importing firm Tartantown Ltd. as a bagpipe technician, shipper and sales associate.