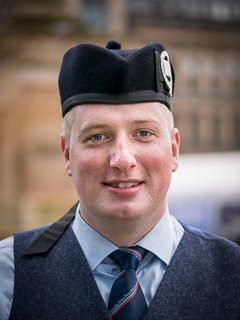 Andrew Lee has been piping with SFU since the Fall of 2005. During his time with the band he has won the World Pipe Band Championships twice (2008 and 2009). Prior to joining SFU he was a member of the Robert Malcolm Memorial juvenile pipe band where he won three Juvenile World Pipe Band Championships. He has also won many solo prizes throughout North America and Scotland including the US Silver Medal, US Gold Medal twice and BC Pipers Cairn for Open Piobaireachd.

Outside of playing bagpipes, he along with his father Jack are the owners of Lee & Sons Bagpipes in Surrey, BC. Lee & Sons produce hand-made bagpipes, pipe bags and chanter reeds.