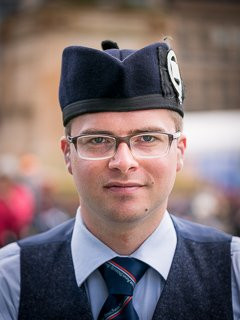 Kevin began piping in 2003 at the SFU Summer Camps and then began playing with RMM in the following fall. He Pipe-Majored the RMM Grade 4 band in 2006 and competed with RMM 3 at the World Championships in 2007 and 2009. In February 2011 he moved into the SFU Pipe Band. Kevin is a regular solo competitor in the Open BCPA circuit. In 2014 he won the MSR at the George Sherriff Invitational, in 2015 he was the overall champion of Nicol-Brown Invitational, having won the Piobaireachd event, and that same year also won the Piobaireachd at the George Sherriff. Kevin also teaches several students in the Lower Mainland region as well as students around the world via Skype.

In 2017, Kevin founded Gracenote Apparel (www.GracenoteApparel.com) - an online store that sells piping and drumming themed shirts, sweaters, phone cases, backpacks and more. Kevin also volunteers on the SFU Pipe Band Society Board of Directors as the Vice President of Communications, and also serves on the Board of Directors as the Chair of the Communications, Marketing, and Outreach committee for the BC Pipers Association.

Outside of the piping world, Kevin completed a Bachelor of Arts degree in Communication from SFU in 2016 and is currently attending the Justice Institute of BC to become an investigator.