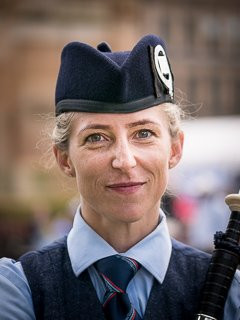 Dani began her piping career in Saskatchewan, playing with the 96th Highlanders, learning from Hugh Fraser Sr., Gord Findlater, and Grant Bunston. As a teenager, Dani continued on to the Strathfleet and City of Regina pipe bands, and began having regular instruction with Iain and Barbara MacDonald. After completing high school, she attended university in Vancouver, and joined the Simon Fraser University Pipe Band, and was fortunate to win the World Pipe Band Championships in her first season! Since 1995, Dani is one of a few members of SFU to have played in all six World's wins.

Over her years in SFU, Dani has performed in competition and concert halls, from Carnegie Hall to Lincoln Centre, from the Sydney Opera House to the Glasgow Royal Concert Hall.

Dani is an elementary school teacher in Burnaby, and has two daughters.