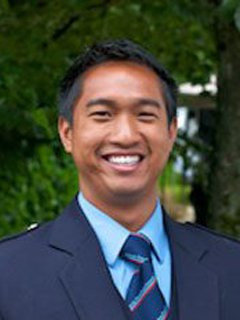 From Coronado, California, Jason Paguio is now a 6-time World Champion Drum Major, having won the title most recently again in 2019. Jason won his first world title in the Juvenile category (18 & Under) in 2004. In 2007, he made international history by becoming the first person from outside the United Kingdom to win the World Drum Major Championships in Glasgow, Scotland. Following that title, he qualified as a finalist 10 consective times and repeated his World Championship wins in 2010, 2013, 2014 and again in 2019, making him the most successful active competitor at the World Championships.

Originally a classically trained trumpet player, Jason's began his drum major career in American-style marching band. He currently serves as Land Use Advisor to San Diego County Supervisor Kristin Gaspar and is a member of the United State Coast Guard Auxiliary. Jason is honoured to represent Simon Fraser University Pipe Band as their drum major, performing with the band in local contests, at the World Pipe Band Championships, in many of the band's concerts, and throughout the world as a drum major instructor in South Africa, Japan, Scotland, Ireland, Canada and the United States.