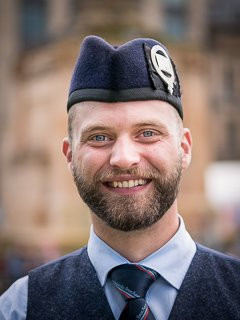 Zak Read began playing pipes in 2000 beginning with Cabar Feidh Pipes and Drums and then Windsor Police Pipe Band (Grade III). He received instruction from John Cairns and in the fall of 2006 joined the 78th Fraser Highlanders and played with them until 2011. As of the 2016 competition season Zak has been a member of the Simon Fraser University Pipe Band.

Solo piping highlights include the 2008 PPBSO Champion Supreme designation (Grade I) as well as competing at the George Sheriff Memorial Competition in 2011. He has also received prizes at the Professional level at several British Columbia Pipers Association competitions.

In addition to piping, Zak is a professional opera singer who graduated with a Masters of Music in Operatic Performance from the University of Toronto in 2014 and can be heard performing at opera houses and concert halls internationally.