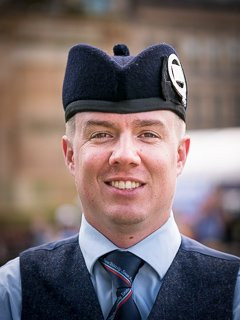 Cam started snare drumming at the age of 10 with the Comox Valley Pipe Band in Courtenay, BC, taking lessons from Robbie Collins in Nanaimo. In 2001, he started lessons with Reid Maxwell and joined the Robert Malcolm Memorial Pipe Band, winning the World Championships in 2003 (Juvenile) and 2006 (Grade 2). He also placed 3rd in Juvenile Section 3 (18 and under) at the World Solo Drumming Championships in 2004.

Cam spent 10 years with Dowco Triumph Street Pipe Band, including leading the DTSPB drum corps for the 2015-2016 season. Cam returned to the SFU organization and joined SFUPB in the fall of 2016 along with his wife, Jessica.

Cam works as a public accountant at a mid-size CPA firm in Vancouver and volunteers as the treasurer for the BC Pipers’ Association. He is also a qualified BCPA adjudicator and snare drumming instructor.