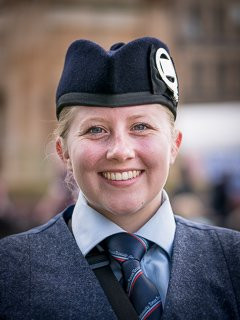 Jessica started tenor drumming in 2002 with the Robert Malcolm Memorial Pipe Band. In 2004, she became the bass drummer of RMM3, and with the band she won both the 2005 Juvenile World Pipe Band Championships, and the Best Bass Drummer prize. She moved back to tenor with RMM2, and won the World Championships again in 2006 with the band.

From 2007 to 2009 with the Dowco Triumph Street Pipe Band, Jessica played tenor before moving back onto the bass drum in 2010. After 6 years of bass drumming, she returned to tenor drumming, joining the SFU Pipe Band in October 2016 alongside her husband. Jessica is an accomplished Bass & Tenor instructor in the Greater Vancouver area.