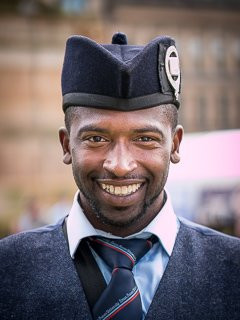 Owen came to SFU from the City of Chicago Pipe Band in 2011. 2018 marks Owen's 8th season with the band. He travels from St. Paul, Minnesota to play with the band. Owen began playing at age 7 under the instruction of Joe Hickey.

His career highlights include winning the North American Pipe Band Championships in Maxville, Ontario and placing top 3 in the Gold Medal Tenor event at Winter Storm. After several years he won the Gold Medal in 2015. Owen’s previous Grade 1 bands include the Windsor Police Pipe Band and the 78th Fraser Highlanders Pipe Band.