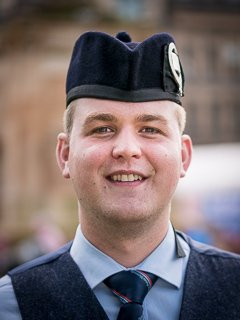 Craig is an up and coming competing piper from Crieff in Perthshire, Scotland. In 2005, Craig joined the Vale of Atholl Novice Juvenile competing band where he played for 3 seasons. At the end of the 2007 season Craig made the jump from Novice Juvenile to the Vale Grade 1 band and at aged 18 Craig was given the position of Pipe Sergeant.

In addition to his success with the Vale, he was also part of the National Youth Pipe Band and along with his tutor Ron Clarke, started the Crieff High School Pipe band.

Craig has competed solo from the offset and is a regular prize winner throughout Scotland. As a junior he enjoyed success at both the Northern Meetings and Argyllshire Gatherings where in 2009 he won the MacGregor memorial Piobaireachd competition. Craig now features in the senior competitions and most notably, in the 2017 season, Craig won both Highland Society of London Gold Medal for Piobaireachd at the Argyllshire Gathering.

In 2016 Craig graduated with a MEng (Distinction) Electrical and Mechanical Engineering and currently works for energy giant Centrica.