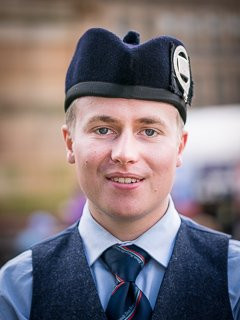 Kyle is from Port Coquitlam, British Columbia, and grew up playing in the Robert Malcolm Memorial Pipe Band Organization. He joined the band in 2015 having previously played as lead drummer in several of the RMM bands, as well as being a corps member with SFU, New Westminster Police Pipe Band, and Inveraray and District Pipe Band. Kyle is an alumnus of Simon Fraser University; he graduated in 2015 with a BA in Cognitive Science and English.

When not playing with the band, Kyle can be found hiking, dirt biking, boating, and skiing.