RMM has members from Grade 5 through to Grade 2

What started out the first night with 35 members, has grown to become one of the largest pipe band organizations of its kind in the world.

With over 150 players and bands in Grades 2, 3, 4 & 5, students are continually challenged by our instructors to be the very best they can be, starting with our Introduction to Music program then up into our Beginner Instrument groups and finally one of our pipe band levels.

These programs bring players together from around the globe who become members of what is known as the SFU Pipe Band Organization. Players joining RMM from outside the Metro Vancouver area are provided with online tutoring in order to make every band member the very best they can be when they arrive in Vancouver for workshops, weekend practices and for highland games across the Pacific Northwest, in California or Scotland.

Our music program lessons are held on Sunday mornings and Tuesday evenings throughout the school year at SFU’s Burnaby campus. 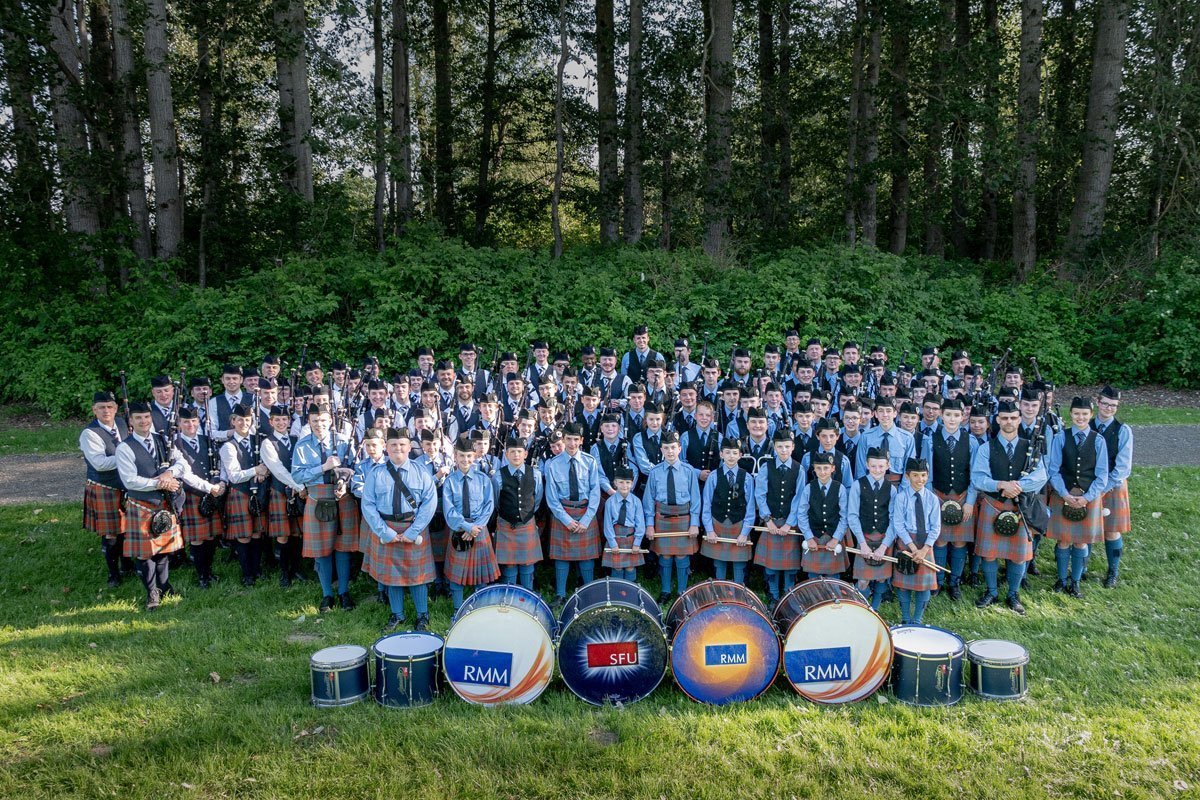 The RMM organization starts children from "lesson one" in bagpipes, snare drum, tenor drum or bass. We have developed a curricula designed to give children the best possible combination of skills and fun while they learn the fundamentals of their chosen instrument.

Beginner Instrument
Conducted in small groups of 3-5 to teach music rudiments and to establish establish the fundamentals on the practice chanters (leading to bagpiping) and drum pads (leading to snare, tenor and bass drumming).

Students participate and compete in one of five band levels, depending on their abilities and interest:

A welcoming band program that transitions novice musicians to playing full instruments, both pipes and drum, and introduces players to the competition arena.

For the past few years, RMM has fielded a very young Grade 5 band in local highland games. It is an excellent opportunity for the next generation of pipers and drummers to gain playing experience in public, and an introduction to the pressures of competing. They compete with a march medley selection. 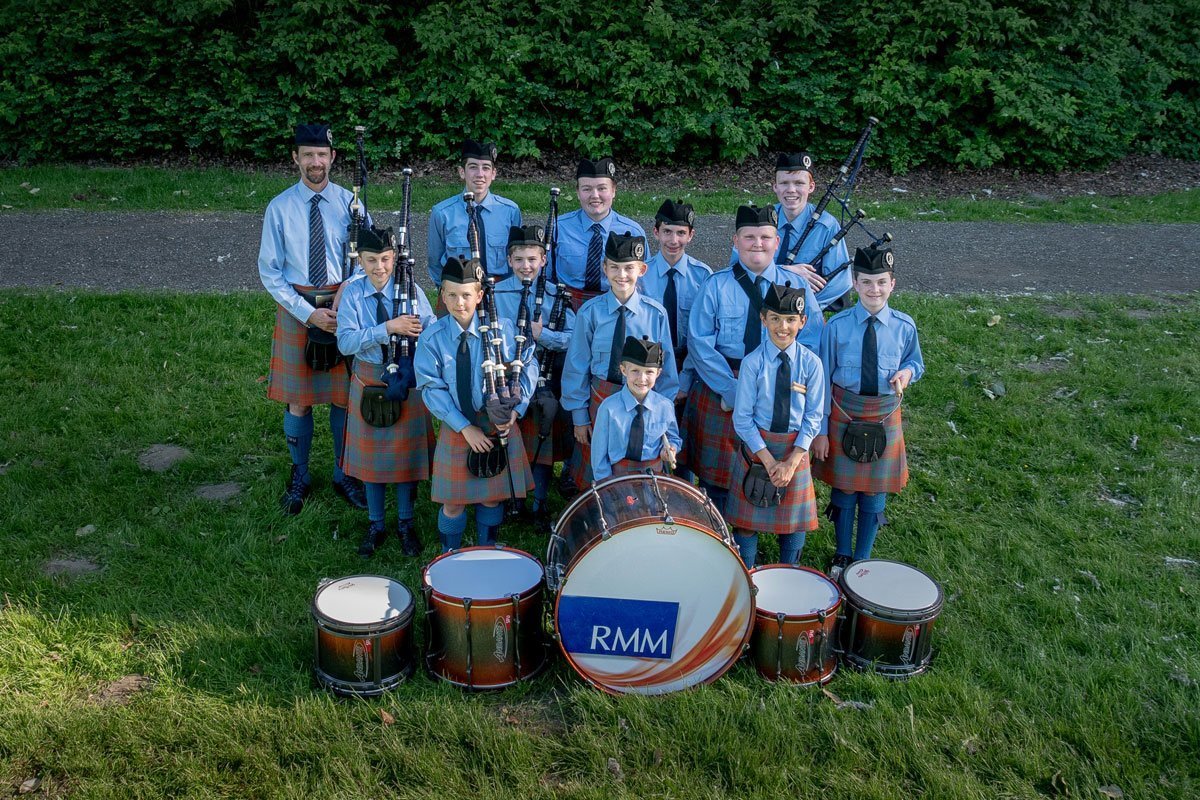 For the first time ever, the 2012 RMM Grade 4 traveled to Scotland to compete at the World Pipe Band Championships, where the band placed 3rd in the Novice Juvenile category. Players in the Grade 4 band also do the local circuit of highland games and play a medley selection and a quick marches set. This band is where pipers and drummers hone their skills and prepare for the Grade 3 band. 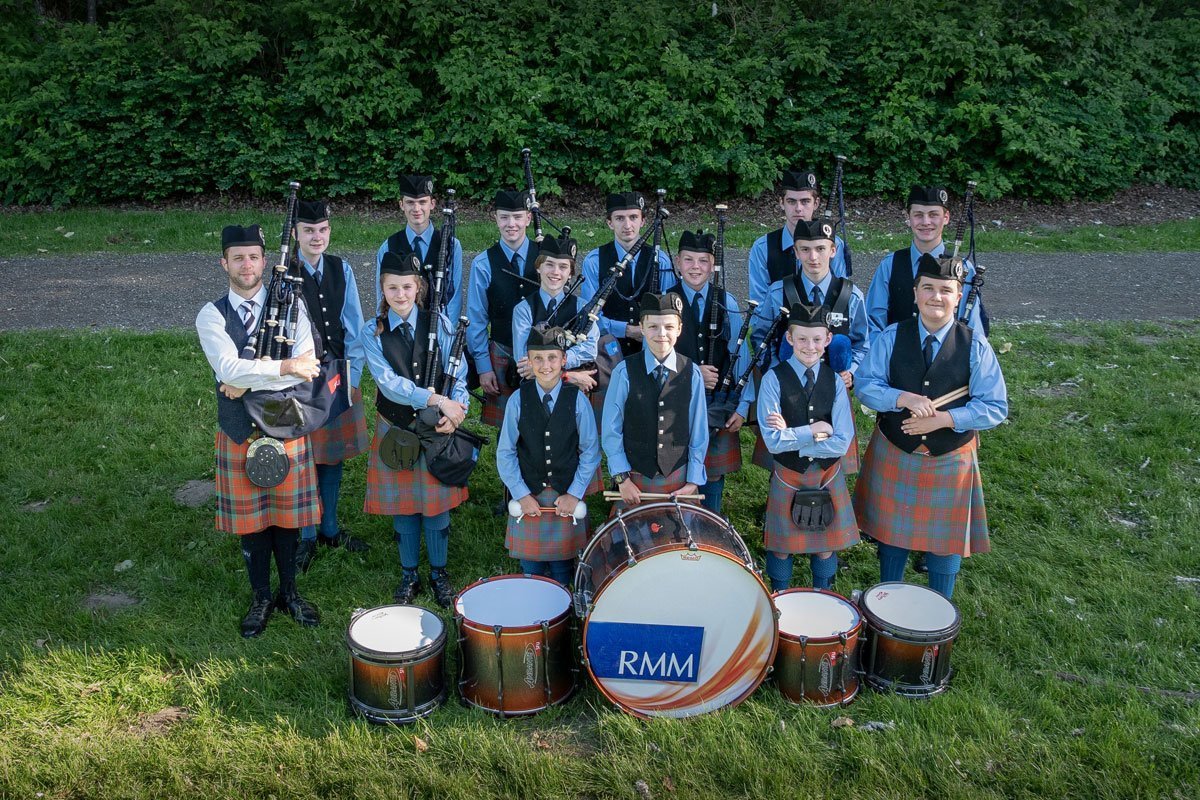 Our most challenging program that encourages individuals to excel at their instrument. This band offers incredible performance opportunities and expects players to commit to performing at an internationally competitive level. Our juvenile bands have won a total of five world championships.

RMM made its first appearance in Grade 3 for the 1996 season after placing first in 8 of 10 Grade 4 competitions in the 1995 season. The band went on to compete at the World Pipe Band Championships in 1997 and took 2nd. With members aging out, this band continually changes, but with instruction from Jack and Terry Lee and Reid Maxwell, the Grade 3 bands placed 1st in the Juvenile World Pipe Band Championships every second year from 1999 to 2005! 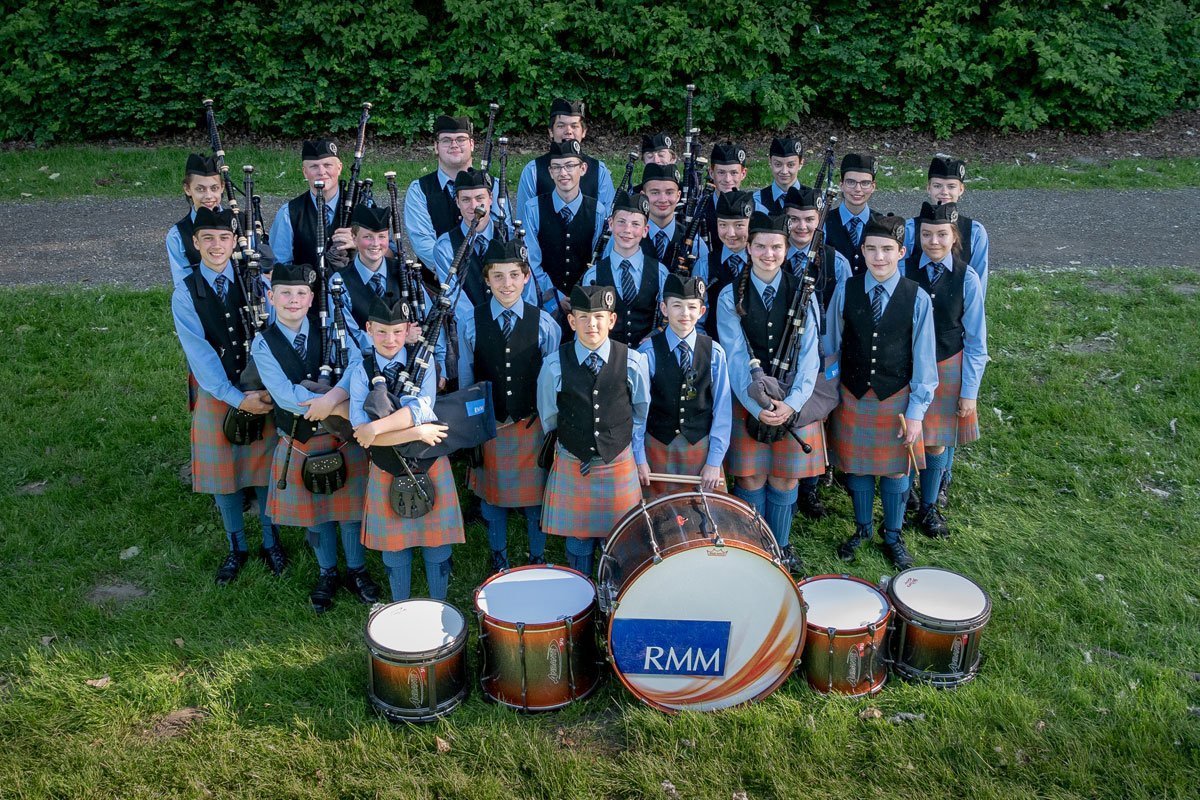 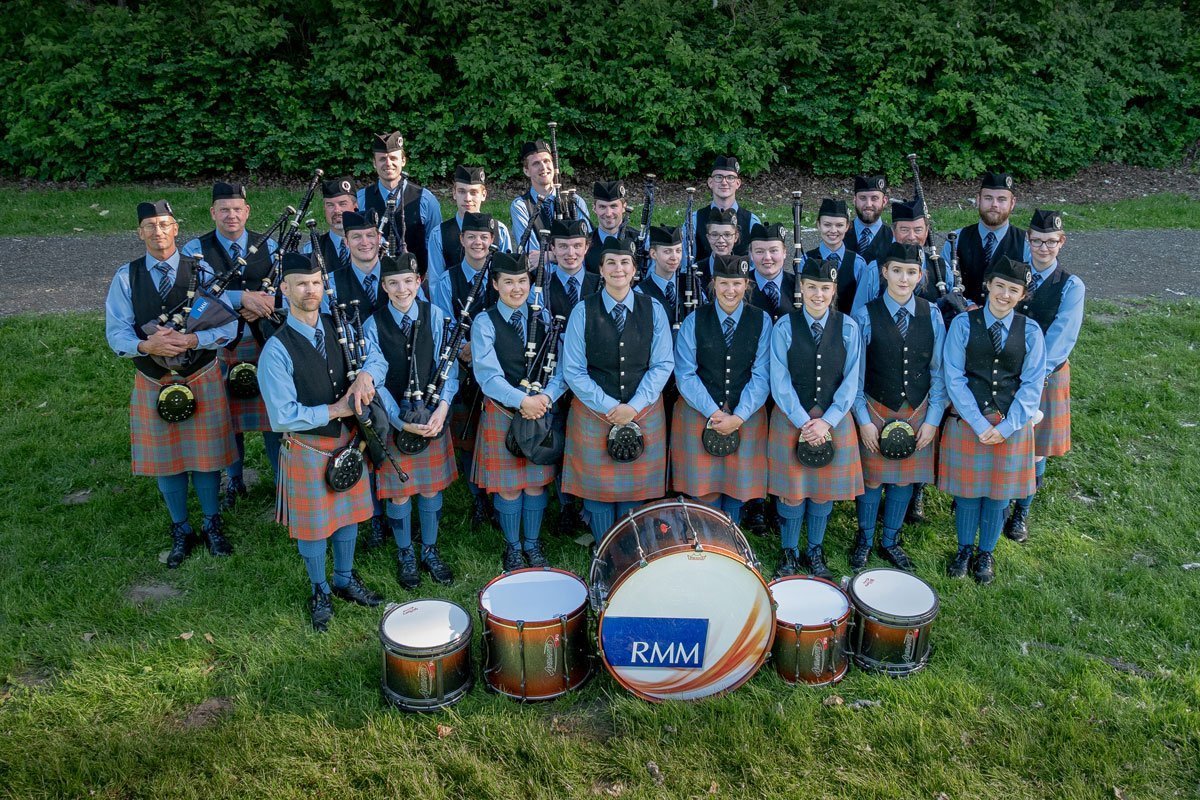 The Simon Fraser University Pipe Band is the flagship band of the SFU/RMM Pipe Band organization. Terry and Jack Lee have led the band since 1981, with Terry retiring in 2013 and transfering the Pipe Majorship to Alan Bevan. Lead Drummer Reid Maxwell has led the drum corps since 1992. Jack and Reid are the chief piping and drumming instructors of the RMM pipe bands. The SFU Pipe Band has won 6 World Championships and produced many landmark recordings in the world's great concert halls, such Carnegie Hall, the Sydney Opera House, and Lincoln Center. Many of the members of this band as well as the Grade 2 RMM are instructors in the organization. 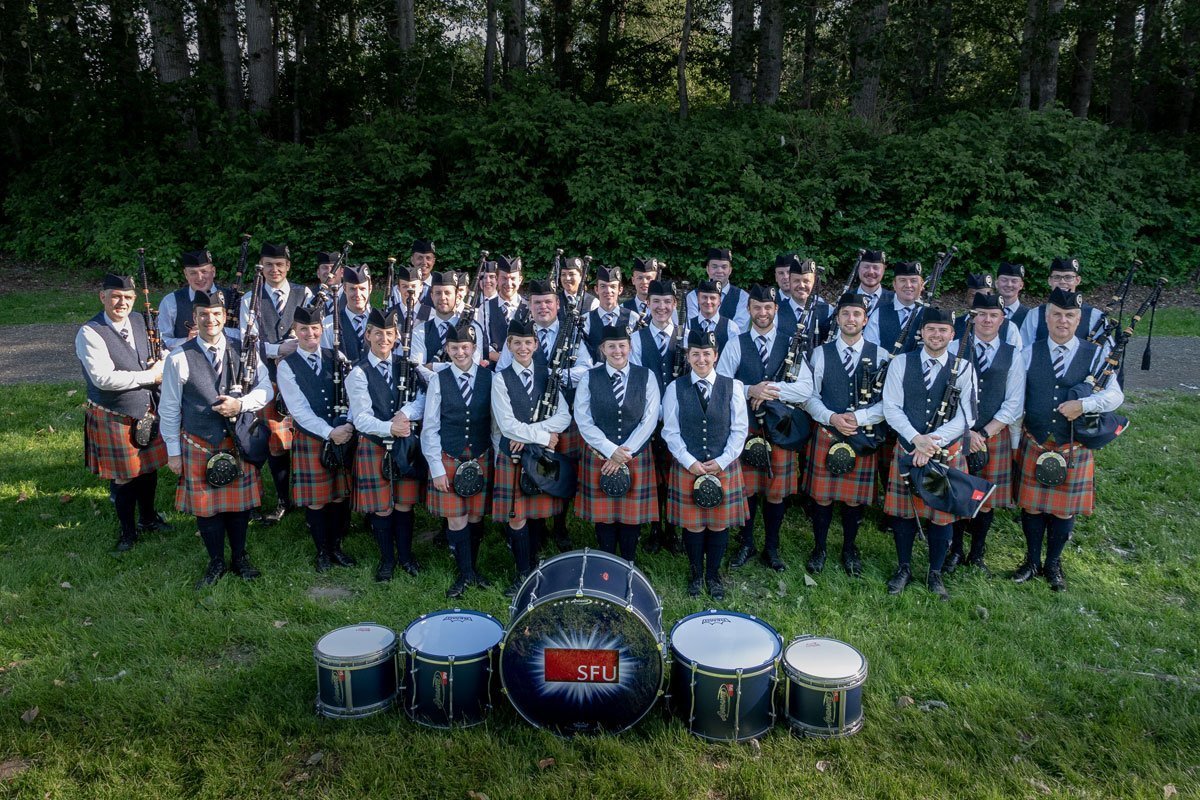